If your Tower has handrail location rivets fitted to the rungs of the frames (as shown), the temporary decks used to assemble/dismantle the Tower can be single decks (inboard handrails can be fitted directly onto the rungs in the centre of the Tower without risk of slipping). This will reduce the number of additional decks required to implement the 3T Method, and is therefore likely to be cheaper, quicker and easier than with Towers that do not have location rivets*

* We understand from SGB that the HSE have carried out independent tests on the Boss Tower - results indicated that horizontal braces fitted downwards onto frame rungs had only minimal horizontal movement when pushed/pulled/fallen against. The HSE have therefore expressed the view that it is acceptable to build the boss tower with single intermediate decks - inboard handrails being fitted downwards onto frame rungs at 0.5 and 1.0m above deck levels in the centre of the Tower.

Kingfisher Access takes the view that, although movement of horizontal braces fitted downwards onto frame rungs is often minimal, ANY movement could result in a user losing his/her balance and falling over the handrails. We will therefore continue to teach our preferred method of using fully-boarded decks with the Boss Tower.

Regulation 8(a), Schedule 1, section 2b of the WAHR states:

"(Means of protection shall-) be so placed, secured and used as to ensure, so far as is reasonably practicable, that they do not become accidentally displaced"

On double width towers, this will often require additional deck units and handrail braces compared to the pre-WAHR kit list from your manufacturer

Note: the toeboards shown in this photo would only be needed if the deck was a working deck, or was to be used for keeping or storing tools or materials 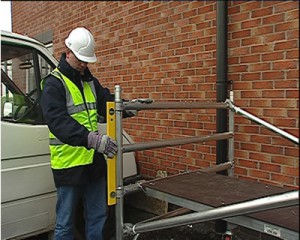 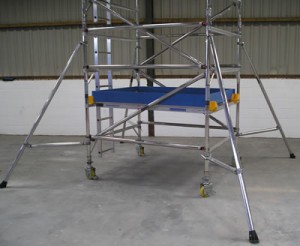 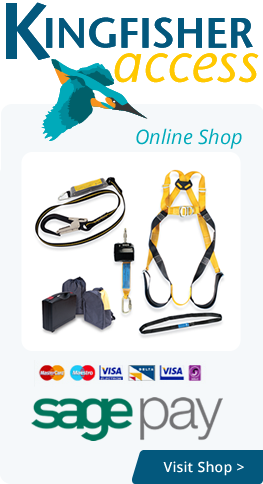 Need training in a hurry?

We also provide courses to meet your specific needs, call our team to discuss availability

Our full range of Health and Safety courses can be carried out at your own premises provided suitable facilities and equipment are available. Please contact us for full details or just a chat to discuss your requirements.